As the location for the world’s biggest independent gold refineries Swiss gold imports and exports demand attention as being an important pointer to movements of physical gold globally.  The refineries specialise in taking gold in various forms – doré bullion from mines, gold scrap and larger sized gold bars - and re-refining it to the kinds of purities and sizes most in demand in its target markets (mainly in Asia and the Middle East).  As such the make-up of the Swiss gold exports, which in most years run to between 1,500 tonnes and 2,000 tonnes (around 45-60% of global new mined gold output), are followed quite carefully by analysts looking at global gold flows.

We have long noted that the huge majority of the Swiss re-refined gold has been destined for markets in Asia and the Middle East, with mainland China, Hong Kong and India the main recipients.  In some months 90% of the Swiss gold exports are headed from West to East and if one also takes into account that China, as the world’s biggest gold producer, already accounts for around 14% of global new mined gold, and does not export any of its production, the physical gold accumulation in the part of the world totally dominates which will lead to shortages of physical metal if U.S. demand, in particular, picks up even a little.

However, on the basis of the latest month’s figures (for August) with Switzerland only exporting a total of 70.4 tonnes of gold – the lowest monthly total in three years according to Germany’s Commerzbank. The German bank went on to note that only 15.9 tons were exported to India last month, 27% less than last August and the lowest amount in 13 months, while exports to China and Hong Kong totalled 20.1 tonnes, which was down 53% year-on-year and the smallest quantity in three years. Perhaps significantly, of the Greater China total, almost 72% went directly to mainland China, bypassing Hong Kong altogether again emphasising that Hong Kong figures can no longer be considered a proxy for mainland China demand or imports. (See chart below from the excellent www.goldchartsrus.com site): 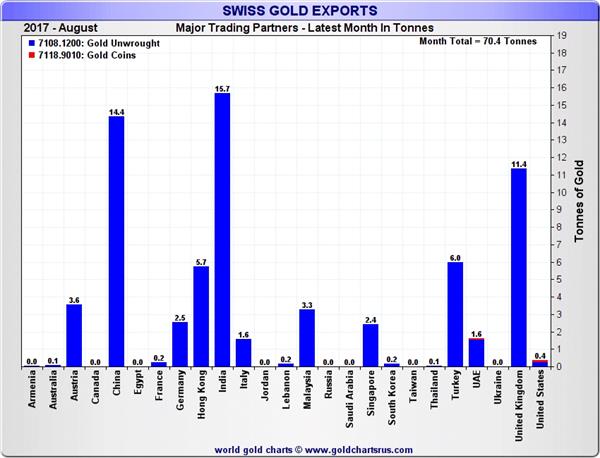 Commerzbank reckons that the slow export month is an indication that the higher gold price of late has adversely impacted eastern demand, but it is probably too early to tell.  Eastern markets become attuned to gold price level changes if they are seen to be sustained, and with the continuing tensions between the USA and North Korea, safe haven demand may carry the day.  The latest threats have come from President Trump on the one hand, threatening to annihilate North Korea and the North Korean foreign minister, Ri Yong Ho, reported as saying that this effectively represents a declaration of war and that thus North Korea has the right to take countermeasures against the USA, including shooting down US planes, even if they are not in its airspace.

North Korea has always been strong on threats, which have seldom been carried out, but is threats have been largely ignored by those countries they have been aimed at.  But now they are faced with an equally rhetorically aggressive U.S. President who may be painting himself into a corner and be inclined to carry out some of his threats to try and nip the North Korean Weapons of Mass Destruction programme in the bud through military action.  Who knows what the results of such an act would be and its impact on China and Russia which might be predisposed to support North Korea.  It remains a geopolitically uncertain world and gold would likely benefit from further instances of aggressive rhetoric from both sides, as it has done today already following the North Korean minister’s latest comments.  Gold has moved back above the $1,300 level having fallen to below $1,290 spot and silver is back above $17.  Whether they will move back to $1,350 and $18 respectively remains to be seen, but if the aggressive rhetoric continues then the chances are they will.  The big SPDR Gold Shares ETF – GLD – continues to add metal which suggests institutions are already hedging their bets.