A Reuters report, citing Swiss customs data, shows that exports of Swiss gold to its two biggest Asian markets, China and India, remained at very low levels, while shipments to the UK and USA which Reuters describes as large trading and storage centres, remained particularly strong again last month.  The ultra-low Indian shipments were attributed by the news agency to the effects of the coronavirus pandemic which had been raging strongly in India at that time and will have been affecting demand accordingly.  However new daily virus infections appear to have been falling drastically in that country so perhaps we will see something of a pick-up in future months.

The following is the latest graphic for Swiss gold exports from Nick Laird’s goldchartsrus.com website for June: 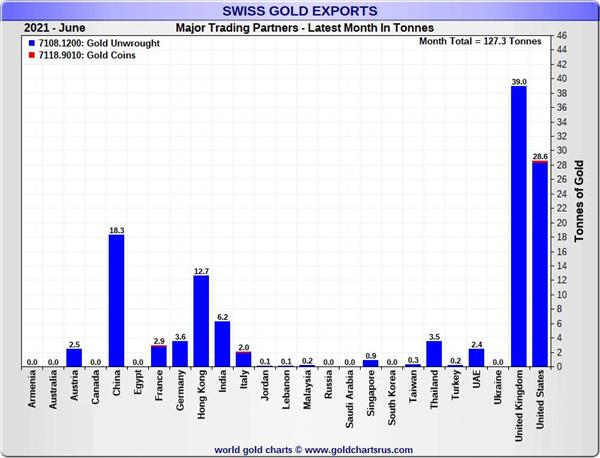 As can be seen, gold shipments from Switzerland to mainland China fell back sharply in June too compared with the previous two months, but this was compensated for, for the most part, by increased gold exports to Hong Kong – most of which will have ultimately been on-shipped to the Chinese mainland bringing the all-China total to 31 tonnes.   This was still below the figure for China and Hong Kong combined in May, which totalled some 36.3 tonnes, and for April when the combined total was  51.1 tonnes in April, after a very slow start to the year.

Exports to India more than tripled in comparison with May, but from an extremely low level.  Earlier in the year Swiss gold exports to India had been recorded at over 50 tonnes in April and over 60 tonnes in March.

Exports to China and Hong Kong combined were also much higher in April at over 56 tonnes, although had been extremely low in the first quarter of the year.  We had assumed back in April that Chinese demand had been beginning to pick up from the previous low levels, but it looks as though our suppositions were somewhat premature, although as the world’s biggest gold producer China is certainly capable of meeting its domestic demand from home-mined metal.  As we have noted in earlier articles, gold withdrawal levels from the Shanghai Gold Exchange, which we see as a guide to real Chinese gold demand levels, are pointing to much higher domestic gold consumption than the latest Swiss gold export figures might suggest. (See:  Big demand boost for China gold in June).

Swiss gold export levels remain hugely important in assessing global gold demand trends as they equate to close to a total of around half of global new mined gold supply.  For historic reasons the Swiss gold refiners have become the principal converters, and exporters, of the refined gold bar, coin and wafer sizes and purities most in demand in global gold export markets.  This gold is imported as marginally lower purity, but much larger, London good delivery gold bars, gold scrap and doré bullion direct from mine sites, for melting down and re-refining for their customers worldwide.

In the past the refineries in this small non-gold-producing European nation used to handle an even higher proportion of global gold imports and exports. But a number of competing refineries, some of which have been set up and managed by the Swiss too, have been springing up around the world, mostly in gold consuming nations.  Even so, the Swiss domestic refinery gold exports with their regularly-reported reliable Swiss customs data, remain an important indicator of global gold consumption and gold flows.