Switzerland, with its specialist gold refineries, is probably the world’s biggest processing centre for the world’s gold market in taking gold scrap, doré gold bullion from mines around the world, gold artefacts for remelting and large semi-pure gold bars for re-refining into the sizes and purities most in demand on the international marketplace.  This may be for re-refining into small gold bar, wafer or coin form.  Altogether these Swiss refineries handle an amount of gold for refining and re-export equivalent to around half the volume of new mined worldwide gold production each year.

The Swiss monthly figures are always followed closely as they are excellent indicators of the directional flow of gold – mostly from weaker hands in the West and from producing nations, to stronger hands in the East. In these nations there tends to be a strong tradition of holding gold against potential future economic hardship and difficulties.  Overall the latest Swiss gold export figures suggest that as usual, the vast bulk of the nation’s gold exports was destined for Asian nations. 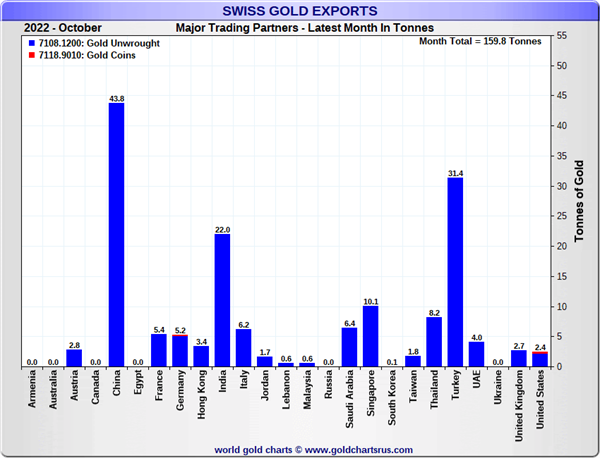 In October, Swiss customs figures show this small European nation exported 159.57 tonnes, the biggest recipient again being mainland China with 43.8 tonnes, marginally lower than the 44.02 tonnes it sent there in September.  But if one takes shipments to Hong Kong into account, most, if not all, being ultimately destined for mainland China, the Greater China total rises to 47.2 tonnes as opposed to 44.1 tonnes in September.  However this still does demonstrate that Hong Kong is largely being phased out as a conduit for gold flows into mainland China, perhaps as part of Chinese policy to downplay the role of Hong Kong in international financial markets, possibly in favour of Shanghai, or Beijing itself.

China, of course, probably remains the world’s largest gold producer by virtue of its own gold mines and production as a byproduct from its custom base metal smelting operations.  This top position is being challenged, though, by Russia and Australia, with Chinese new mine production tending to fall and Russian and Australian output apparently on the rise.  China, though, has been securing additional supplies through strategic investment by state-owned companies in gold mining operations elsewhere in the world.

The second biggest recipient for the Swiss gold exports in October was Turkey with 31.4 tonnes.  Again this was marginally down on the September figure of 32.2 tonnes, but remains high nonetheless and signifies the continuation of economic unrest within that nation, as recently demonstrated perhaps by the assumed suicide bombing in Istanbul.  Turkey is also a fairly significant gold producer in its own right.

India, however, which is normally one of the top two recipients of Swiss gold exports, received only 22 tonnes – down from 34.8 tonnes in the previous month, despite the lower gold price which often sees a boost in the more value-sensitive Indian demand picture and the onset of the festival and wedding and festival season there.   But there have also been anecdotal reports of a surge in smuggled gold into the country which could have accounted for some of the apparent deficit.

Singapore, which is vying to take the place of Hong Kong as a major financial Far Eastern financial centre, though took in 10.1 tonnes, 1 tonne more than in the previous month.  This small nation’s demand growth is perhaps worth watching carefully.