Of late the monthly Swiss gold import and export figures have thrown up some surprises brought about by the re-emergence of Covid-19 infections in some countries and, of course, the impact of the Russia/Ukraine war on global trading patterns.  These factors seem to have impacted, one way or the other, the Swiss import and export totals, and, in particular, exports of refined gold products to China/Hong Kong, India and the USA.  On the latest Swiss import figures for May there even appeared to be the highly unusual receipt of 3.2 tonnes of gold from Russia which has created a degree of discussion among analysts given that there is usually no such trade pattern between the two nations, although in this instance the Russian gold appears to have come from bullion previously held in London, but of Russian origin.

We already noted some big anomalies in Swiss gold exports reported in the previous month when the overall total was an extremely low 70.4 tonnes (See: China back as No. 1 importer of Swiss gold but at low level.) and India only received 8.8 tonnes – a figure exceeded by exports to both the U.S. and the UK.

According to precious metals consultancy Metals Focus, March lockdown restrictions being re-introduced in China, eventually led to a collapse in consumer demand there. This in turn quickly translated into far weaker bullion imports – figures confirmed by lower Shanghai Gold Exchange gold withdrawal figures on which we also reported.

It was telling that January/February Swiss gold exports to mainland China/Hong Kong accounted for 75% of the first five months’ total. In contrast, May exports to China/Hong Kong stood at just 13.2 tonnes, their lowest since March 2021, and allowed India, where demand was picking up after a couple of very weak months, to resume the top spot for imports of Swiss re-refined gold at some 35.6 tonnes.  Just under 82% of Swiss gold exports were destined for Asia and the Middle East in May, which was a return to a fairly normal overall directional export pattern. 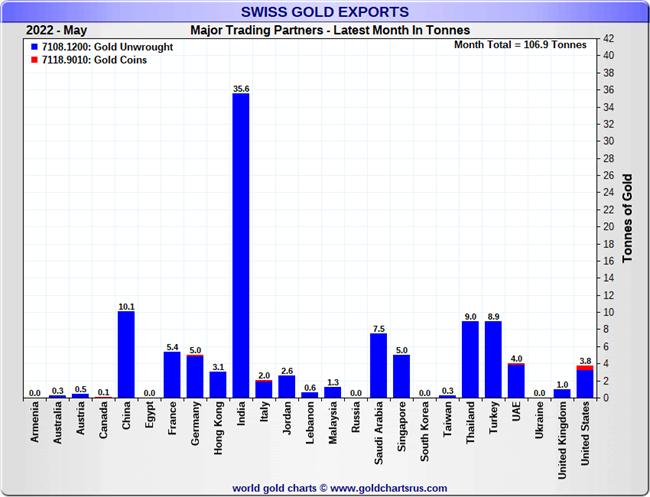 Metals Focus also noted that exports to India have been notably volatile in recent months and that it is worth remembering that the remaining COVID restrictions were lifted late last year, which at the time contributed to renewed optimism across much of the trade. However, early 2022 saw a combination of new COVID cases and also rising and volatile gold prices, even though the wider Indian economy continued to rebound from the pandemic.

Price volatility was then exacerbated by the onset of the Russia/Ukraine war.  Indian demand tends to be particularly price sensitive and this saw Swiss gold exports to the nation collapse in March to just around 5 tonnes and to only the 8.8 tonnes in April when gold prices surged, before recovering in May when the gold price had drifted downwards again.

The third trend that Metals Focus thought worth highlighting relates to the strength of deliveries to the U.S.  On a year-to-date basis, these surged by 170% to 103 tonnes, although they had slipped right back in May. That said, they remain well below volumes delivered into the U.S. in 2020, at the height of the exchange for physical (EFP) crisis. Even so, the five-month total is the second highest on record. This partly reflects, Metals Focus concludes, the strength of minted bar and coin demand in the U.S., which has remained exceptionally healthy over most of the past two years.

Swiss import and export figures thus remain significant in the context of directional overall gold flows as we have mentioned in the past.  With the latest pattern they seem to be reverting to the past flow patterns of movement of gold from perhaps weaker hands in the West, where trade represents a greater part of the system, to stronger hands in the East where hoarding tends to be more prevalent.  This represents perhaps sometimes unjustified historical trust in government stability and the safe haven reputation of gold as a wealth protector.