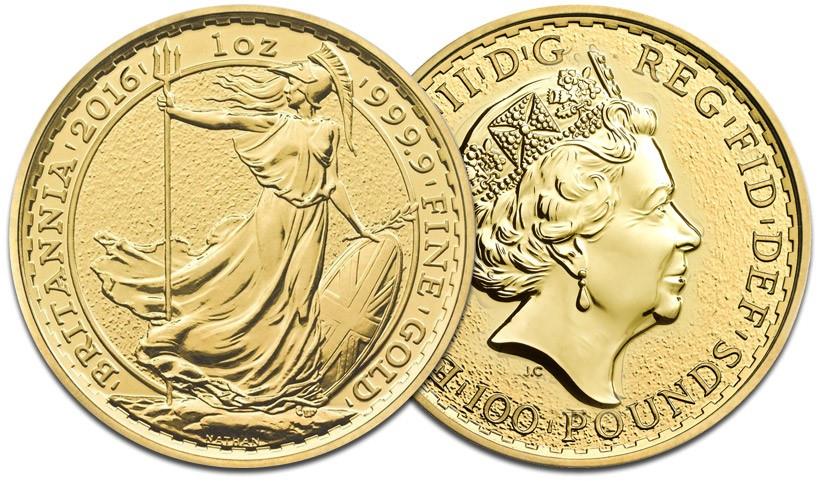 The Britannia is a British bullion coin, exclusively minted by the Royal Mint since 1987 in gold and 1997 in silver. Since its launch in 1987 as the first European investment coin, the Britannia has become a popular inclusion to investment portfolios and private collections alike.

The concept for the Gold Britannia coin came about due to the need for a one-ounce British gold bullion coin that could rival the popularity of the South African Krugerrand, the Canadian Maple and the American Eagle.

The famous ‘Standing Britannia’ design by British sculpture Philip Nathan was chosen by the Royal Mint ahead of fifty-one other entries to grace the reverse of the coin.

When released in 1987, the Britannia was struck in 91.6% gold, alloyed with copper. This was updated in 1990; when the alloy was changed to silver – which still maintained the 22-carat purity but meant the colour turned from a reddy colour to bright yellow gold. 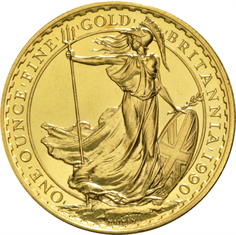 The gold Britannia coins are available with unlimited mintage and are made in denominations of 1oz, 1/2oz, 1/4oz and 1/10oz. The smaller sizes make perfect gifts and are often gifted during births, weddings and special occasions like Diwali and Christmas.

Similarly, the most popular British Silver investment coin is the 1oz silver Britannia, which was first issued in 1997. Each Silver Britannia is produced from 999 fine silver, with each 1oz coin containing exactly 31.1035 grams of silver.

The Spirit of a Nation

Britannia is to Britain, what the Maple Leaf is to Canada. It has been a symbol for the British people for hundreds of years; outlasting monarchies, governments and social and political establishments.

Over the centuries, Britannia has become a readily identifiable British icon; immortalised in everything from monuments to company logos. She is the embodiment of the qualities that we most hold dear as a nation – dogged determination, bravery and strong, unwavering will in the face of adversity.

The Royal Mint issues a new Britannia coin every year – the latest iteration for 2019, has been designed by artist David Lawrence, who also contributed the 2018 design, drawing his inspiration from Britannia’s connections with ancient Rome.

The first recorded inclusions of Britannia go back as far 119AD. ‘Britannia’ was the Roman name for the UK, and it was often the case that the Romans would reflect countries using female figures. After the Romans left, she was not seen again until the rule of Charles II. She’s been a familiar figure on British coinage ever since.

Britannia is famously depicted on modern coins as a Goddess, holding a trident and a shield emblazoned with the Union Jack. However, it wasn’t until 1797 that she exchanged a spear, for the now world-famous trident – which was designed to reflect Britain’s strong nautical traditions. 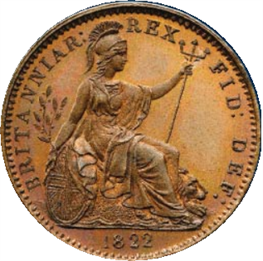 The trident is still present on the 2019 coin, as she raises it toward a new dawn as if acting as the leader for the people she represents. 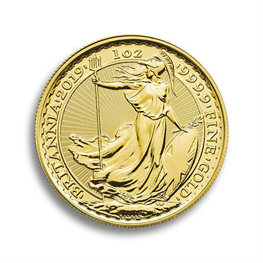 Britannia gold bullion coins have the advantage of offering investors transportable wealth; they can be easily exchanged for goods and services almost anywhere across the globe.

Unlike bulkier gold bar investments, which can’t be separated, coins can be isolated and stored in different locations or investment portfolios.

Both the gold and silver Britannia’s hold tax advantages, here’s what you need to know before investing:

Although the coin is of great interest to investors, it also holds mass appeal as a collector’s item due to the many design changes both sides of the coin have undertaken over the years.

Once you set eyes on the beautiful Britannia coin range, it’s easy to see why it’s regarded as such a firm favourite with investors and collectors; this coin will make a perfect addition to your collection or investment portfolio.

We are committed to providing outstanding gold products at the most competitive prices on the market. For more information on golds coins, gold bullion or any of our other products give us a call on 0203 318 4383 or better yet, why not visit our London, St. James’ street showroom to chat to us in person?