Whether you’re a seasoned coin collector, or simply just starting out on your coin collecting journey, it’s very likely that you’ve heard of The American Eagle gold coin. These coins attract a great deal of attention from collectors and admirers from all over the world.

Minted in West Point, New York, this coin is formed in several different weights, including an ounce, ½ an ounce and a ¼ of an ounce, all with their own face value.

Each of these coins is guaranteed to be measured to its equivalent weight in gold, which means that each American Eagle coin is accepted as legal tender.

Even considering all this, there is still an even greater reason why so many people enjoy purchasing and investing in American Eagle Coins, and this is because of the rich history behind the coin’s existence. The origins of this coin date back as far as the 18th century. Beginning in 1792, the coin was initially offered in a selection of mints, including: 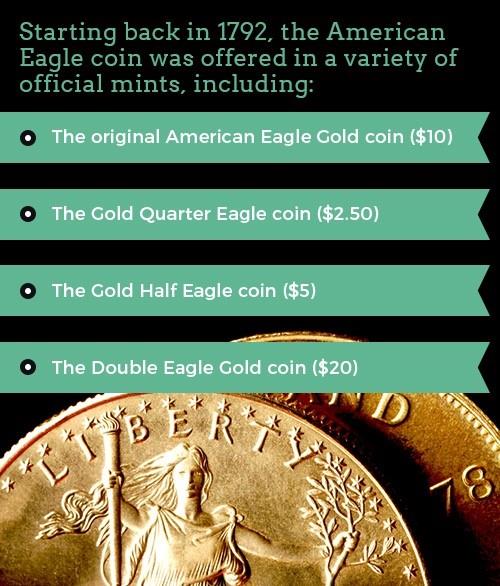 Due to the period, these coins were created under the crown gold standard, which meant they were minted with 22-carat gold. However, once the United States had abandoned this in 1834, the gold content was reduced to 0.900 gold content.

In the late 1920’s, the USA would suffer an economic depression which would last for a decade when the stock markets collapsed in 1929. Discontinuing gold coins was Roosevelt’s attempt to protect the banks from the early effects of the Depression, due to the passing of the Executive Order 6102 in 1933 that, by law, prevented any citizen to possess gold of any kind – except agreed items of jewellery and family air looms.

Under this order, the public was made to exchange any of their owned gold into the equivalent cash value, which enabled the U.S. Federal Exchange to take complete possession of the country’s gold reserves. What’s more, the order also banned the export and private ownership of gold.

While this effectively took the gold out of the hands of the citizens, it proved extraordinarily effective at increasing the spot price per Troy ounce of gold from $20.67/oz. to $35/oz. This, of course, turned the heads of foreign investors, who exported substantial quantities to the U.S., which helped to increase the accumulation of gold within both the Federal Reserve and the United States Treasury, which was intended to spark an upturn in the fortunes of the US Dollar.

The resolution of the Great Depression meant the U.S. could move away from the gold standard, where they could instead rely on paper currency. This resulted in more gold coins going missing throughout the mid-20th century, where collectors had begun to retain them for investment purposes rather than recirculating them. It’s for this reason that the pre-1933 American Eagles are of particular interest to collectors.

However, the embargo instated with the Gold Reserve Act of 1934 was repealed over time, starting in the 1960s. During this time, Americans were able to freely buy, sell and invest in gold once more, and the American Eagle would begin its revival. Following the disappearance of almost all of the gold coins from circulation during the mid-20th century, the coin began to see a re-emergence before the turn of the century. The Gold Bullion Coin Act of 1985 was signed into law by the United States’ 40th president Ronald Reagan and along with amending previous codifications, also allowed the U.S. Treasury to begin minting brand new bullion coins.

These coins were intended to be produced using fine gold from newly minted U.S. locations, and they were to be imprinted with their gold content and the valuation of their face value. The significance of this act meant that the American Eagle Gold coin became one of the world’s most popular gold bullion coins.

The American Eagle is often praised for its uniquely American design. The design holds historical significance on both the obverse and reverse sides, featuring intricate artwork from both the early and latter parts of the 20th century. 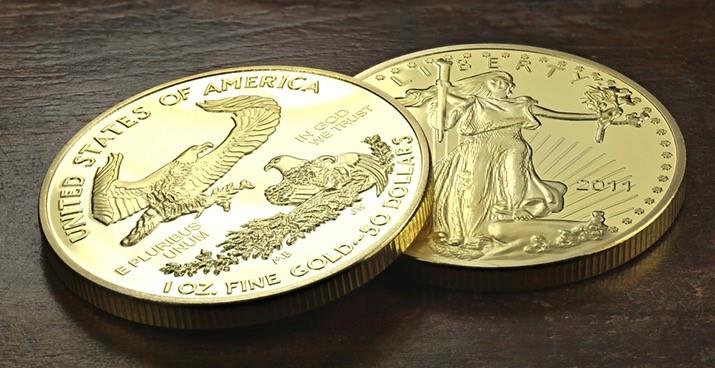 The obverse displays an interpretation of Lady Liberty, designed by Augustus Saint-Gaudens. The des

he reverse of the coin features a majestic male eagle as designed by sculptor Miley Busiek.

The male eagle grasps an olive branch in his talons while flying around a nest which contains a female and several hatchlings. This is designed to represent the familial backbone of the USA.

The American Eagle is an of particular interest to investors due to the relatively low cost and consistent price increases. So, whether you’re searching for a sound investment, or you’re a keen coin collector, then the Gold American Eagle will be a beautiful addition to your portfolio.

Since their re-launch in 1986, the American Eagle Gold and Silver bullion coins have amassed a great deal of attention due to the increased political and economic instability that we’ve experienced, particular over the past 15-20 years or so.

We are committed to providing outstanding gold products at the most competitive prices on the market. For more information on golds coins, gold bullion or any of our other products give us a call on 0207 871 0532 or better yet, why not visit our London, St. James’ street showroom to chat to us in person?

ign is taken from the $20 coin, first commissioned by Theodore Roosevelt between 1907 and 1933. Roosevelt had requested a design that would invoke the look of the ancient coins of Greece and Rome in hopes that it would celebrate the mounting power that the United States was enjoying on the global front during that time.

Saint-Gaudens Lady Liberty is captured almost mystically in mid-stride, with her hair billowing down over her shoulders. Holding an olive branch in one hand and a lit torch in the other, which suggests a safe, peaceful passage into the future. The U.S. Capitol building can be seen in the background – a symbol of the tremendous political democracy of the American government.