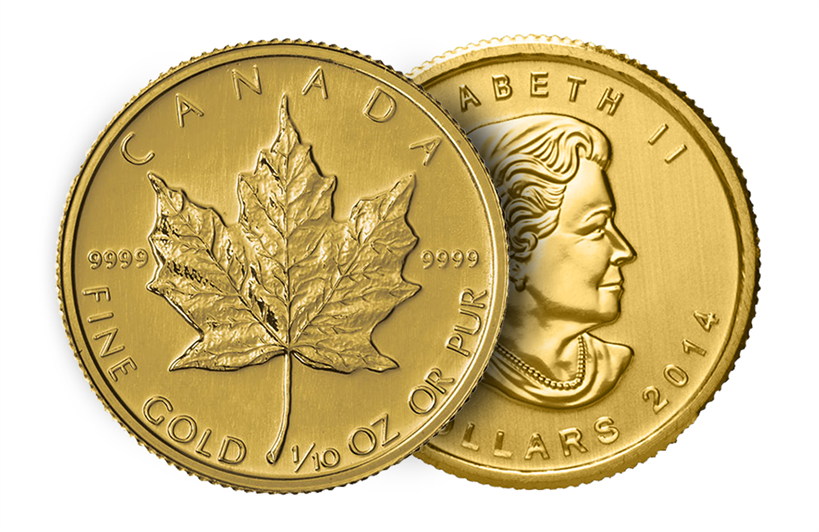 Introduced in 1979, the Canadian Maple leaf is minted by the Royal Canadian Mint and features the famous maple leaf symbol, which is often synonymous with the national identity of Canada.

Throughout its history, the Maple Leaf has been extremely popular, and now includes highly secure measures to prevent copies, such as the micron-precise pattern that gives each coin an exact radial line which creates a very distinct light-diffraction pattern, which is said to be unmistakable.

One of the reasons that the Gold Maple Leaf has always been a popular choice is because it was the only 99.9% pure gold bullion coin available when the coin was first introduced in 1979.

By 1982 the refining process was further improved, resulting in coins of 99.99% (24 carats) purity, making it one of the purest gold coins available anywhere in the world.

In other words, they are made of only gold, with no other alloys present. The coins come with a guarantee by the Canadian Government which assures the buyer of the authenticity of both the weight and purity of the product.

In May 2007, the Royal Canadian Mint struck a limited addition coin which weighed one Troy Ounce and was the only coin in the world to achieve purity levels of 99.999%. These were put together into a set of three coins produced, in addition to the 99.99% coins, in 2007, 08 and 09 which were highly prized by collectors and investors.

Also in May 2007, the Mint produced a Gold Maple Leaf coin with a face value of $1 million using gold content that was worth, at the time, $2 million. Weighing in at one hundred kilos, with a 50cm diameter and a 99.999% gold purity rating, this coin gained plenty of interest during production.

On the back of this interest, the Canadian Mint decided to strike the coins on order, with prices anywhere between $2.5 and $3 million. 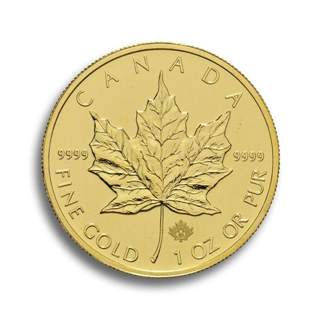 All of the Gold Maple Leaf bullion coins feature the same design. The national symbol of Canada, the maple leaf, is seen, as above, on the reverse of the coin, while the obverse depicts a profile of Queen Elizabeth II. 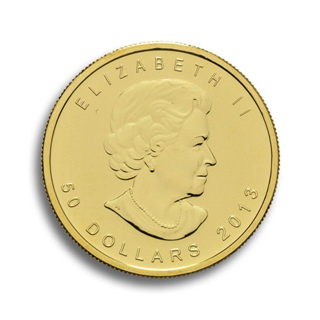 On the other side, ‘CANADA’ features above the maple leaf, below this the purity is shown, with the words ‘FINE GOLD’ and the weight of the coin.

The coins were initially made using gold mined from within the Canadian border, which helped to cement that feeling of national pride and identity. The original coins garnered enormous international popularity, an interest that remains strong four-decades later.

The Royal Canadian Mint was incorporated in 1908 as the Ottawa Branch of the British Royal Mint, chiefly to cope with the foreseen arrival of the legendary Yukon gold rush.

Maple Leaf is not a legal currency in the UK, which means that investing in these coins will incur Capital Gains Tax for UK residents.

If you are interested in purchasing CGT free bullion coins, see our ranges of Sovereign and Britannia coins.

Once you set eyes on the Canadian Maple Leaf, it’s easy to see why it has retained its popularity, four-decades after it was first commissioned. A firm favourite with investors and collectors, this coin will make a perfect addition to your collection or investment portfolio.

We are committed to providing outstanding gold products at the most competitive prices on the market. For more information on golds coins, gold bullion or any of our other products give us a call on 0203 318 4383 or better yet, why not visit our London, St. James’ street showroom to chat to us in person?