Gold and silver dominate the precious metal investment market and are likely to continue to do so into the foreseeable future. However, PGMs are increasingly emerging as significant additions to investment portfolios, offering investors attractive opportunities to diversify their existing holdings and gain more complete coverage of the spectrum of precious metals.

Many investors turn to gold as a form of wealth preservation, seeking to capitalise on the commodity’s stability. Meanwhile, silver typically witnesses greater levels of price movement; a volatility which holds greater potential for generating profit. Of the two, PGM investment more closely resembles the trends observed in the silver market, with growing interest in these niche metals largely attributable to their price fluctuations in recent years. 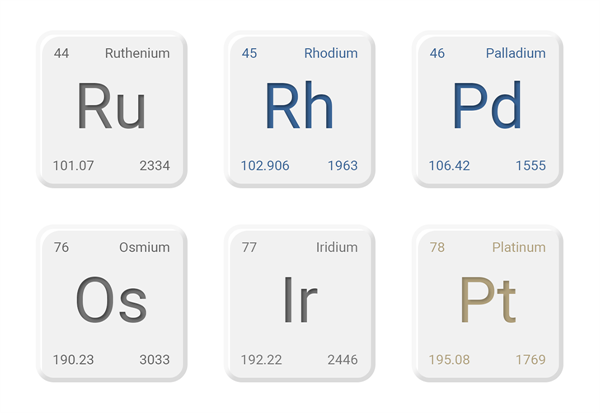 Platinum, palladium and rhodium belong to a set of metals referred to as the Platinum Group Metals (PGMs), together with a trio of lesser-known metals (ruthenium, osmium and iridium). PGMs are typically found as metal alloys, occuring in the same mineral deposits and sharing similar chemical properties. Rarer than both silver and gold, all six of PGMs collectively make up only 0.0005 ppm of the Earth's crust, according to the U.S. Geological Survey. They require complex mining and refining processes.

The concentrated geographical location of PGMs has played a part in their rising prices: South Africa, the dominant producer, holds circa 88% of estimated global resources. Additional resources can be found in Russia, Zimbabwe, Canada and the United States. Unlike gold or silver, supply of PGMs is more greatly affected by external economic, political and labour factors.

Whilst undeniably rare and precious, PGMs also have an important functionality aside from investment; as vehicle autocatalysts, in jewellery as well as for a range of other industrial uses, including chemical, electrical, petroleum, glass and dental work.

Difficult extraction processes, limited concentration of stockpiles combined with ongoing political and labour issues have constrained the supply of PGMs. Simultaneously, demand for PGMs is being propelled by the various industries which make use of them. Under these conditions, the profitability and popularity of PGM investment is gaining traction.

Why Invest in Platinum?

The platinum that has been mined is approximately 30 times rarer than gold. Of all the PGMs, platinum is the most liquid commodity, bolstered by large retail markets and precious metals brokerages. Similar to silver, platinum has price support from both the jewellery and industrial sectors of the economy.

China is the world’s largest market for platinum jewellery accounting for over half of annual demand, whereas India is a key driver of growth, with demand increasing 10 fold in 7 years, partly due to a rising men’s jewellery market!

Although platinum is most familiar for its use in jewellery, it is more often used in the systems that control vehicle emissions and also electronic goods; Platinum is necessary for liquid crystal displays, and platinum increases storage density on hard disks for laptops and servers.

Platinum supports diesel cars which have seen falling demand recently due to emission legislation in several major cities, but a potential key driver for future demand might be Fuel cell electric vehicles (FCEV).

Whilst only circa 3% of platinum purchased is currently held as investment, demand for platinum bullion has begun to increase significantly in recent years, fuelled by investors seeking to diversify within the metals sector. Platinum prices have rarely fluctuated below those of gold, only doing so on two occasions in a thirty year period. At present, platinum prices are at a five-year low with commentators expecting a price increase to correlate with a decrease in supply.

Why invest in Palladium?

Palladium was first isolated in 1803 by William Hyde Wollaston (who also discovered rhodium shortly after), and is circa 15 times rarer than platinum. Palladium remained obscure until the Second World War; growing in stature in the 1940s once the US government had outlawed the platinum trade (due to the strategic need to produce weaponry). Chemical and aesthetic overlaps with platinum saw jewellers gradually substituting palladium until it gained recognition as one of the big five precious metals.

Palladium appears in vehicle emissions equipment, electronics, fuel cell production and dentistry. Of these, the most widespread use is in automobile manufacturing (when the metal is used in catalytic converters for petrol engines), accounting for over 55% of palladium’s demand.

Whilst palladium is still a relative newcomer to the precious metals scene, it has yet to gain a prominent foothold with investors. Indeed, investment into palladium has been driven by its more accessible price point. In 2017, however, the persistent market deficits of the last six years began to have a significant impact on the price of palladium, which steadily climbed from under $700 per ounce in January, overtaking the platinum price in September, and reaching $1,050 at the year end.

Also noteworthy is the fact that significant surges in the price of palladium have resulted from political factors and labour law in South Africa; for instance, palladium prices nearly quadrupled over a one and a half year period (starting 2010) against the governmental backdrop of deliberating mine nationalisation.

Why invest in Rhodium?

Rhodium is produced entirely as a by-product of platinum or nickel-mining, with no exclusive rhodium mines in existence. There are less than ten significant mines in the world which can produce rhodium, most of which are located in South Africa, which supplies over 85% of the world's demand for the precious metal. Circa 25 tons of rhodium are extracted each year, as contrasted with 2,350 tonnes of gold or 220 tons of platinum, which gives a sense of the rarity of the metal.

In recent years, power shortages in South Africa have forced mining companies to decrease rhodium production, which has created sharp deficits in the supply/demand dynamics of the rhodium market. These conditions means that global rhodium supplies can not easily respond to changes in demand. Thus, if rhodium supplies are short, this is reflected in drastic price surges. Consequently, one of the most significant benefits of rhodium investment is the ability to make significant profit margins; in the last few years, rhodium has hit highs of £7,000 per ounce, although the average is between £700 - £2,000.