Expect a busy start to the week as we enter the new quarter with higher volatility. Most traders have stayed on the side line throughout last week as they digest the latest economic and political development. October brings various volatile scenarios on the table and the economic calendar is filled with many market moving data. Talks of tapering continue to be data dependent and FOMC members have voiced their views that it is still possible to taper this month. The other headline news is the possibility of a new Fed chairman to replace the outgoing Mr Bernanke. Current favourite to win the seat is still Miss Yellen who will remain dovish. Meanwhile, debt ceiling wrangle between the democrats and republicans is set to go underway with tough negotiation but most analysts felt that the ceiling will be raised. Deadline on the debt ceiling is the 17th October - Jack Lew states.


With vast amount of data out next week, it could well set the direction for the month of October. Dollar index weakness could get some lift on positive data while the equity market tries to adjust to its recent gain. The start of the last quarter of 2013 will be closely watched and we envisage that the debt ceiling will be raised after much wrangling, we do not see any tapering in October, continued dollar weakness against other currencies and possibly a higher precious metal prices for a short while.

Weekly Chart
Weekly gold chart from (16th to 23rd September) have a close at $ 1324 level with long wicks at both ends of the doji pattern. The close from last week marks an important level despite the lack of interest from either camp. Price action continues to trade below 20 DMA which has been acting as both support and resistance. Other support level stands at $ 1305 and $ 1291 level while the key support for this corrective move to sustain stands at $ 1277 level. Only a break and close below $ 1277 will spell more bearish move. Meanwhile, the upside rally remains capped with the on-going taper talks among FOMC members. Despite weakness in the dollar index, gold failed to capitalise and beset by a stronger equity market. Technically, the price action is contained within the symmetrical triangle pattern. Further pullback is in favour should it break below the rising trend line. Otherwise, we continue to see range trading within the converging Bollinger band. RSI has failed to cross above the resistance level at 50 while the stochastic is meandering sideways. 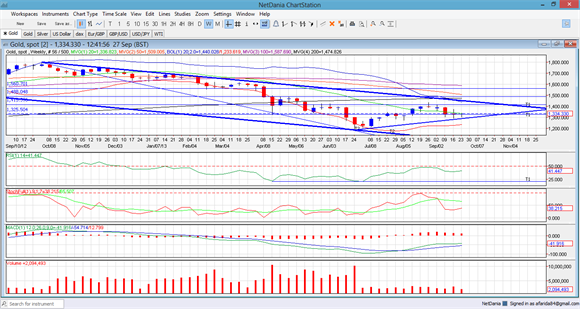 Weekly Chart
We continue to see bearish momentum on the white metal with a target below $ 20.00 level. Upside surprises might come in the form of a weaker dollar index and rising gold prices due to on-going wrangle in US debt ceiling. The converging Bollinger band will act as target on the weekly chart and we continue to argue that the upside looks capped. The MACD histogram has started to head lower while the RSI at 50 areas might act as resistance again. 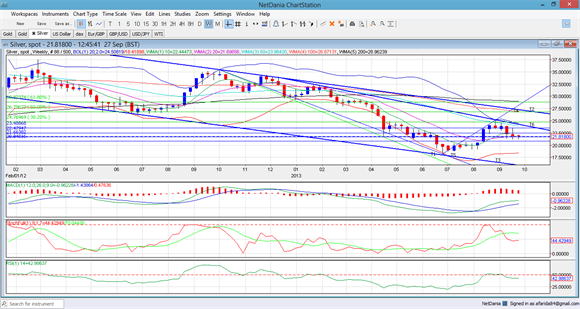