Once again, the take down on gold happened on the basis of an important economic data which further suggest investors’ lack of interest on the yellow metal. A better than expected NFP numbers sent a strong message that the US labour market is recovering and well. This indicates that the Fed could start the tapering programme on QE as early as this summer despite the fact that unemployment rate came in higher at 7.6% (Fed’s target is 6.5%). Chairman Bernanke remains dovish and supportive of the existing QE programme but talks on tapering has escalated among other Fed officials. Economic data streaming out of the US remains mixed but the market has decided not to bet against the herd of US dollar and equity bulls. The stock market recovered all the losses and dip buyers re-entered the market in hordes as the data was highly welcomed and end the short term correction. The market was discounting for a miss on the NFP data and many got caught out in the wave.

The beginning of the month showed that gold prices remain susceptible to US economic data, the strong US dollar index and the current performance of stock market. There was clear pressure of a potential short covering if the NFP data came in lower than expected. Gold failed to break $ 1424 (38.2% retracement line from previous low of $ 1321 to $ 1488 area) and the build-up on a potential short covering was a weak one. This is because gold have failed repeatedly to hold above $ 1400.00 level despite putting up a brave attempt to support the prices on several occasions - resulting in higher lows. Renewed selling appears whenever gold was trading at or above $ 1400.00. Initially, the breakout of the tight range trading was a promising sign but failure on gold to capitalise on the weaker dollar sent a strong message that the market was just not ready to move higher.

The short term outlook on gold is biased to the downside as the next minor support comes in at $ 1373 followed by $ 1354 and $ 1339. After the rejection on a move higher, it opens up more rooms for the bears to pressure for lower prices. Renewed short selling at or above $ 1400.00 indicate that will be a strong resistance and only a break above $ 1425 will enable the bulls to aim for higher prices. In the meantime, we expect a period of consolidation but with a biased downside potential.

Support was found at $ 1375 area as gold continue to trade within the range of previous low $ 1373 and $ 1423 levels. Initially, a stronger dollar and rallying equities added selling pressure. Buying interest was evident when the dollar weakened as St Louis President Fed Bullard speaks of his concern on deflation and the need to see a higher inflation numbers. He added by suggesting that the Fed could only taper if the labour market improve. On the other hand, WSJ Jon Hilsenrath made comments that we could see Fed’s tapering action as early as the June FOMC meeting. Market in the weeks ahead will remain choppy and we expect gold to further consolidate but will face strong resistance at $ 1390, $ 1395 and $ 1400. 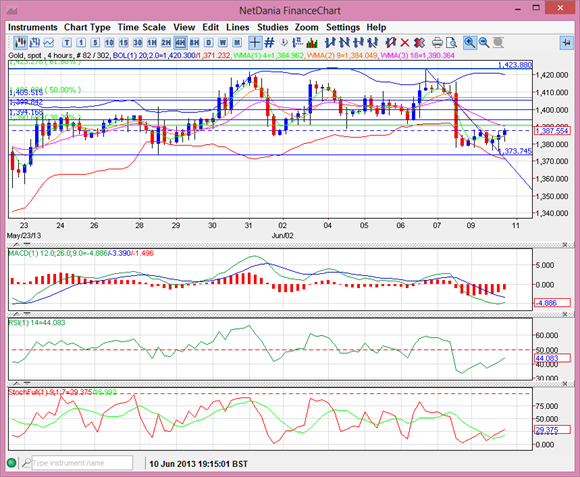 The dollar index met resistance as it attempted to cross higher and failed to breakout from the downtrend that started from last month. Silver gained as dip buyers enter the market at $ 21.41 and managed to push the metal pass $ 22.04. The selloff last Friday meant that the bears are alive and well. We are not surprise to see further selling pressure in this market if the dollar rebound higher. However, we expect strong support coming in below $ 21.00 but a break below that would meant a revisit to previous low at $ 20.00. Silver continues to trade in a downtrend and it broke below its 20 DMA after the selloff. Only a break above $ 23.35 will it encourage the bears to do more short covering. 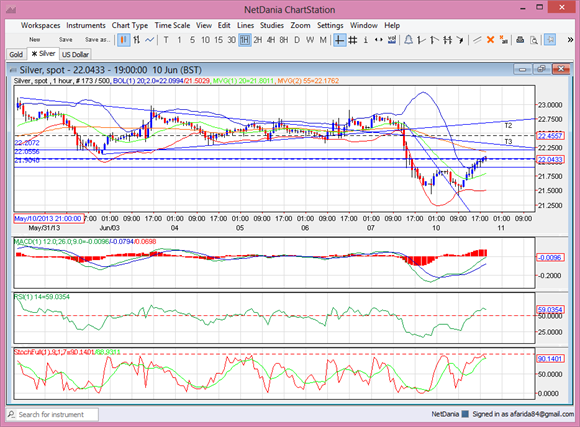