Asian market reopens with a poor Chinese HSBC manufacturing PMI and the data fuelled economist fear that a slowdown in the second largest economy is to be expected. Stock markets and the Aussie dollar did not take such data kindly, traded lower as investors are worried on a global slowdown - spanning from the US and the fragile Eurozone. Meanwhile, Eurozone manufacturing PMI for April came in slightly better than expected but still showing contraction. Christian Lagarde of IMF has already warned the ECB to act and change their austerity stance to a pro-growth fiscal and monetary policy. The north south divide among the EU countries can be clearly seen on the economic numbers, growing concern of disinflation as well as a high level of youth unemployment added pressure on ECB president Mario Draghi to cut interest rate. He did just that and delivers a 0.25% cut on the interest rate.

FOMC meeting statement is reflected as neutral to gold positive. Gold was initially sold off but held at support $ 1440 and then retraced higher. Half of the market continue to see additional stimulus as a major plus for a higher gold prices but certain group are worried that the Fed are laying the foundation to cut back on the monthly $85 bln QE programme depending on the economic data. The statement reflects heavily on the change in unemployment figure which play a big part in the Fed’s on-going decision. Gold tracked other markets lower on renewed worries over the Chinese, US and Eurozone economies.

In other news, investment banks continue to pour cold water on gold early recovery. Michael Haigh of Societe General shared his view that gold has “come to the end of its era as ETF flows and Hedge fund flows have gold changing in direction for the first time in a long, long time.” Goldman Sach continue to see gold prices heading lower even after they close their short position - arguing that it will take time for gold investors to recover from the sharp selloff. One of the biggest factors remains to be the outflow in ETF funds which has not abated despite strong physical demand for gold bars and coins. Legendary investor - Jim Rogers prefer to stay on the side line at the moment and will only buy if gold revisit $ 1300 level again.

Trading ended with gold heading a lot higher after it found support at Wednesday low of $ 1440. The ECB cut interest rate as expected gave gold prices a boost higher as it was initially trending between $ 1450 and $ 1455 area in the early European trading session. A better than expected US Jobless claim initially slowed the rally but soon prices moved higher to retest the upper trend line (see below 1 hour chart). At the moment, the upper trend line is the resistance at $ 1474 and the next big resistance stands at $ 1485. A break pass $ 1485 will allow gold to retest $ 1500 and $ 1515 area.

We picked out an interesting quote from Kristian Kerr, Senior Currency Strategist of DailyFX.com who shared our view - “If the 1320 area is going to undergo some sort of re-test we would expect it to start from somewhere around 1500. On the other hand, if the metal just blows through 1500 then the importance of last month’s low will increase significantly.”

We would like to repeat our advice from our previous commentary that the gold market could see possible slowdown in physical demand which may weaken gold rebound. In addition, continuous outflow of funds from ETF only increase selling pressure. Investors who are still holding will be wary of a possible margin call again.

One of the biggest worry is that gold could start to break lower and short sellers continue to add pressure. A break below $ 1456 (50% retracement) could easily take gold to a low of $ 1404. However, a break pass $ 1404 will give the bears more control and prices could fall to revisit $ 1325 again. 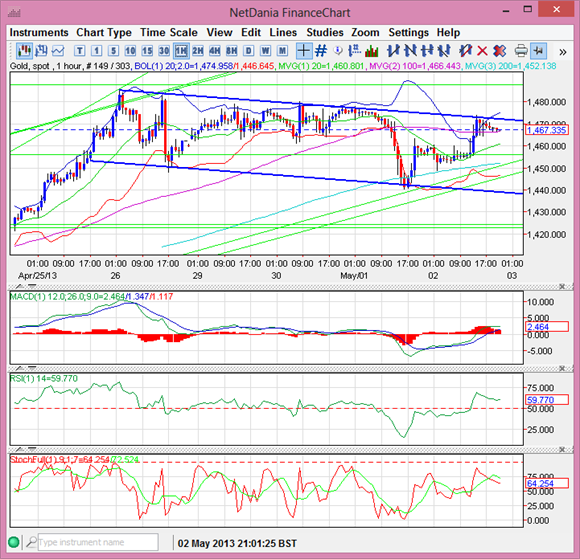 A rebound in gold took silver higher as it also found support at $ 23.26 (see chart in Gold & Silver - Warning Signs Ahead!). Technically, the RSI was oversold while the stochastic fast line hit rock bottom. Post FOMC data has helped spur silver prices higher despite the gloomy economic data. ECB rate cut helped the prices to soar higher with the RSI treading higher which indicate strong buying interest. The MACD has also crossed into the positive territory on the hourly chart and the current trend continues for now.

However, we must continue to warn that the rebound could be on its last leg and a break below the lower trend line (Daily Chart) could spell more downside pressure on the white metal. The market remains bearish and this rebound could prove short lived as the speculators are positioning for more price weakness in the next few weeks. 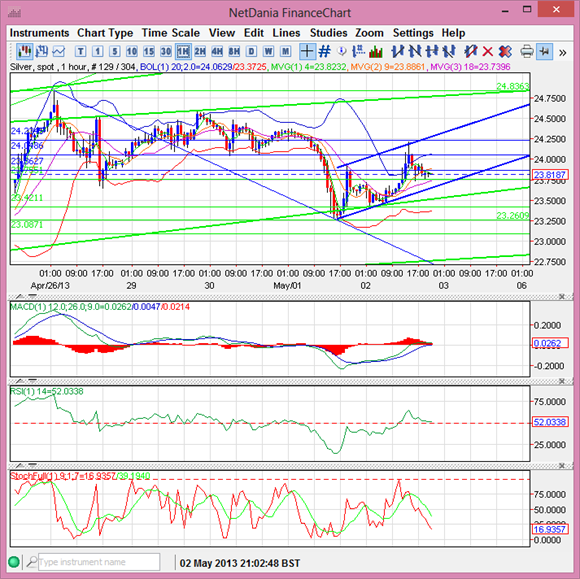