Bullion traders are asking themselves - how much further does this corrective rally has to go and when is a good time to short the pullback? Is this another opportunity to short the metal as it is still trading in a bear market? There are two separate camps that are fighting it out to be the dominant one and both metals are vulnerable to either break higher and pull back or start pulling back lower to retest a higher low.

The short term outlook on both gold and silver remain bullish with more upside to be tested. We felt that prices could retrace and test for support before embarking on a move higher. Only a significant sell off could reverse the current short term trend. A good close last Friday will give both metals room consolidate and assuming other factors are being supportive. Reduction in ETF outflow or signs of buying interest could encourage more buyers to join. In addition, a weaker US dollar index has allowed gold prices to break higher. Despite massive sell off in the equity market, both gold and silver are bought as a safe haven investment. The turmoil in Egypt has not abated; there is real fear of more violence clashing in the next few weeks (or months) that could destabilise the country. Various analysts have called for a bottom and most argued that bullion sell off has created an overstretch market. Physical demand has always been the main support to ease the continuous outflow on gold back ETFs.

Austin Kiddle of Sharps Pixley gave a clear indication that interest in the bullion market is on the increase for now and August is usually a strong month for gold.
“On the other hand, the World Gold Council reported that consumers purchased 1,083.2 tons of gold in Q2, a jump of 53 percent over the year. Gold bar and coin purchases jumped to a record while jewellery demand reached the highest level since 2008 as buyers saw the value of gold after the price plunge. The overall demand in gold dropped 12 percent to 856.3 tons in Q2, led by the 400 tons of ETFs selling by speculators and investors. Bloomberg reported that traders are most bullish since 8 March about gold prices next week.”

This short term bullishness indicates a bottom in the market is in place but most investors remain sceptical that a trend reversal is in play. To be fair, both gold and silver need to break key resistance level before it could resume its bull run again. The next few months’ price action will be crucial and it all depends how much short covering will be done. A temporary moment of bliss and consolidation will sets in before another major direction play is in place. We continue to share the following worries as per the following script from Edward Meir of INTL:
“Despite these upbeat reports, we view the latest data as being an upward blip in what we think remains a deceleration in China’s growth trajectory. Having said that, gold prices will likely remain resilient at least through August and it may not be until mid-September when markets turn sloppier in the aftermath of the Fed’s tapering program.”

The price action has been resilient and bouts of short covering have helped propel higher prices. A corrective move higher is currently in play to target $ 1365, $ 1376 and $ 1415 area. We need to see a convincing follow through buying and a break on the daily RSI above 60.00 will give more edge and confirmation on this run higher. The MACD is suggesting potential room to break higher while the stochastic is showing strong momentum. Our only worry is that the larger trend remains down and this bout of short covering rally could soon be over. 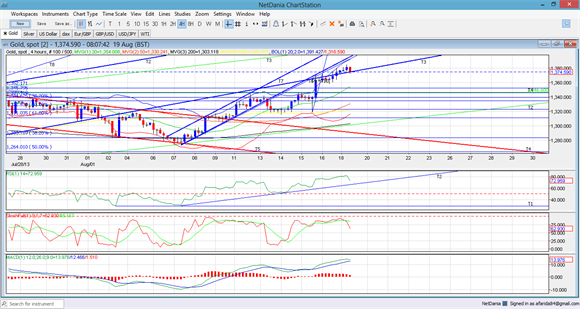 Silver long term chart indicate an oversold market that is ready to bounce higher and bargain hunters may already have started increasing their long position quietly. The most promising chart is the Weekly chart where the stochastic fast line is trending higher, indicating strong interest and a higher RSI that confirm higher move is possible. The MACD is still in the negative zone but a change in trend could be in play soon. We felt that the downside is limited for now and fresh investment as well as long position can be considered as long as gold prices can head higher. 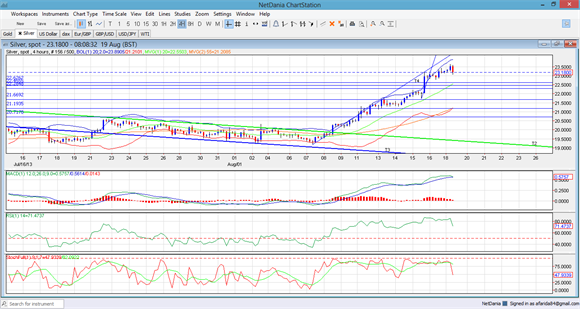