There is no respite as the Eurozone crisis seems to flare up another round of austerity debate. We have highlighted in our previous commentary that the Eurozone is fraught with political and economic imbalances which could easily reignite old problems. The media spotlight falls on Portugal this week as its government need to find more spending cuts in order to get additional bailout funding. It was not long ago that the Cyprus government refuse to the bailout programme set by the Troika. To avoid further escalation, the Portuguese government will need to maintain public confidence that their bank accounts is safe.

Meanwhile in Asia, Japanese Yen continue to weaken against the USD and gold in Yen terms posted a 5% increase. Tension between North Korea remains as report state another possible nuclear test on the 10th April. These war games by little Kim could continue to affect the region stock market except Japanese Nikkie index that continue to benefit from the weaker Yen. The Korean Won may soon act to devalue their currency in order to remain competitive. We mentioned this in our last article back in February that the large QE embarked by Japan is a start of another round of currency wars.

The rising concern for central banks around the world is the gradual increase in inflation as well as public distrust in their own currency. Yes, at the moment inflation is rolling at the bottom end of the curve but it is too early to discount that it will never go up. There is a growing number of American states that are worried about the US dollars they hold will become worthless on the back of continuous money printing programme. Bloomberg reports added that the Fed have no plans to taper the QE programme as they anticipate another slowdown in the US economy. In addition, the sequester effect warrant more stimulus spending to avoid any more negative numbers. Therefore, this week FOMC meeting minutes may prove rather bullish for the gold camp as the last employment data was by far the worse.

Gold Technical
We have been observing the recent change in gold’s sentiment. It may be too early to predict where prices are going but we cannot discount the fact that it is still vulnerable to selling pressure. Nevertheless, our observation lies on the late US trading hours where gold is bought and not sold. Monday Asian trading hours, gold hovered at Friday’s high of $ 1582 before crumbling down to $ 1568 in the late European trading hours. 4 hourly chart shows support at $ 1566, $ 1561 and $ 1556 respectively. As of the time of writing, a close above $ 1565 will bode well for gold bulls. Prices did bounced higher after a test at $ 1568.

Tomorrow FOMC meeting minutes will shed more lights into Fed’s thinking and latest discussions. They will assess and recognized that the last quarter has been rather good for the economy. However, we are sure that Mr Bernanke will continue with the easy monetary policy and money printing programme as he will repeatedly raise concern about maintaining the momentum of good economic data. He may have to address possible asset bubble in the real estate as well as the stock market. We felt that he will downplay such worries as inflation remains subdued. Overall, we felt that the meeting minutes will maintain a dovish approach and gold bulls could use that as a stepping stone to retake the 20 DMA at $ 1592.00. 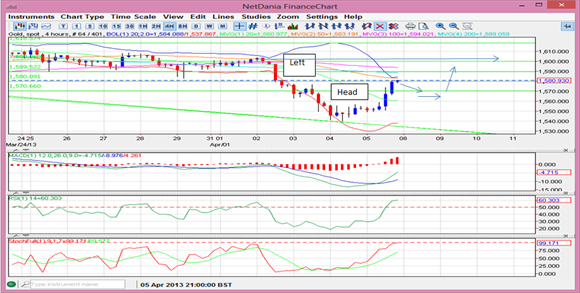 Following the arrow signal, we could see an early H n S formation and take note this is a reverse H n S.
We are watching a pullback possibly to 1562 or even 1560 then a shoot up to form the right hand. The most important target now is the breakout line at 1600 or 1603 area which is the neckline. Once that is cross, we see a quick rally possibly up to 1615 before falling back to 1605 then the rally continues to take 1620 out. Silver managed to keep most of its gain made from last Friday high of $ 27.43. It touched the upper Bollinger band and currently consolidating between the high made and a low of $ 27.13. Once again, we are happy to admit wrong if silver can rally from here. We are still cautious on any rally and remain bearish until silver managed to retake the $ 28.00 level.

Technically, the daily chart indicates a possible bullish reversal in the making. However, the MACD is still rolling in the negative zone and the stochastic fast line could still break lower. The lack of demand could easily escalate the selling pressure and undo the bullish technical indicator. Silver could repeat another bout of range trading and consolidation at this area but once the support at its previous low is given, we fear a strong push to $ 26.00 is possible. 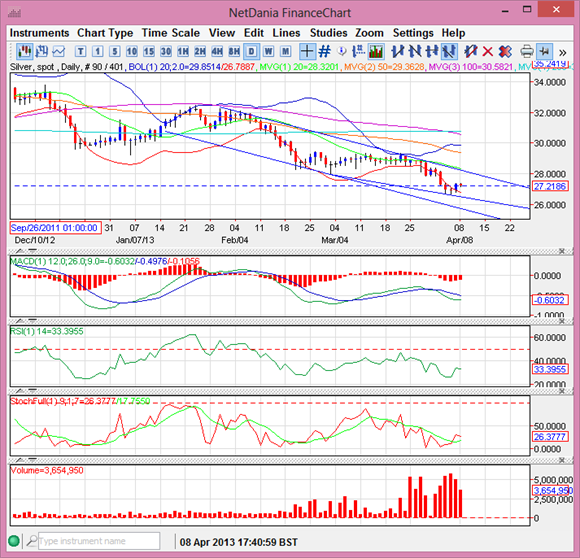