While a month is a pretty short time in terms of global finance, the fallout from the U.S. Fed’s December rate rise has seen, as expected, a stronger U.S. dollar.  But what virtually all the major bank analysts had forecast – a consequent decline in the gold price in U.S. dollar terms – just has not come about.  In the event the reverse has been true and gold has been rising along with the dollar, contrary to generally accepted gold price theory.  This is pointed out beautifully in the latest chart from Nick Laird’s www.sharelynx.com charting site and is shown below. 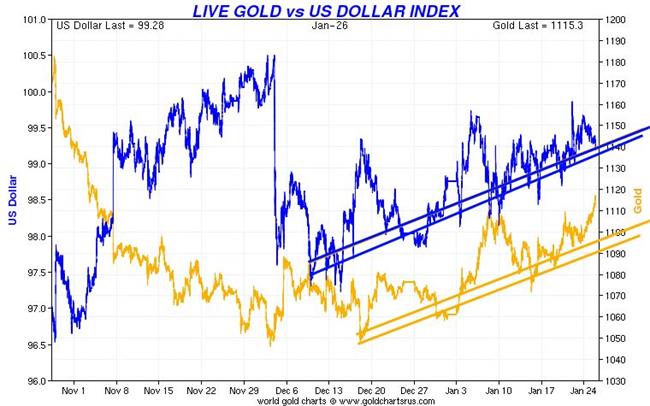 As can be seen from the chart, ever since around the time of the Fed increase of 25 basis points, small though that was, the dollar index has been on an overall upwards trend. Before the Fed increase gold and the dollar had been exhibiting their normal relationship – dollar up and gold down.  But since the rate rise – almost to the day – gold has also been rising overall.  Indeed it has even been rising far faster than the dollar.  Can this continue?

What the forecasters had not been taking into account has been the post Fed rate increase dive in general equities virtually across the board, as markets took the rate rise, together with Fed projections of three or four more similar increases this year, as a sign of continuing money tightening.  Indeed the stock market declines – perhaps further stimulated by something of a rout in Chinese equity markets, which are even more of a casino than their Western counterparts – look as though they could be in danger of turning into a true rout

Here’s a 3-month chart from kitco.com for the S&P 500 index, corresponding to the dates of the gold and dollar chart above:

As can be seen, although the market downturn took a little longer to kick in after the Fed decision, once it did it has seen a much greater downturn than either the dollar or gold have proved to be so far on the upturn.  In percentage terms, since January 1st this year, gold has risen by around 5%, the dollar index by a little less that 1% while the S&P 500 has fallen around 7%.

The longer the equities downturn continues, or perhaps accelerates, perhaps the stronger the return as an investment asset for gold.  If gold is perceived to offer a positive investment return while equities look vulnerable to further sharp downturns then the likelihood would be that gold, and other precious metals, notably silver, will start to come back into favour – possibly strongly.  We are already beginning to see this with some sharp inflows into the major gold ETFs.  After all one of the main reasons suggested for gold’s weak performance over the past three years was that the seemingly never-ending rise in equities, pushed up by central bank stimuli made gold almost irrelevant as a safe-haven asset class.  Now with the Fed supposedly pushing forward with a continuing programme of small interest rate rises it seems the boot is on the other foot, and it is the general equity sector which may have been hardest hit by the Fed’s intended tightening.

Of course Wall Street is now crying ‘foul’.  The institutional funds and bankers were more than happy with the Fed’s easing policy driving up equity prices, but now that a proposed further tightening has already led to opinions being expressed that the rate rise was a mistake.  Indeed it may well be that the next FOMC pronouncement will be more dovish and suggest that the proposed programme of rate rises this year may be slowed.  It’s probably too early yet for a complete Fed backtrack, but if equities continue to fall, and the U.S. economy carries on stuttering (there have been almost as much negative data in the followed economic indicators as positive), a halt to any further rate increases this year has to be on the cards.  If it were to cut interest rates again that would be perhaps too much of a blow to the Fed’s credibility for it to contemplate doing this – much as it may well have talked itself into a perhaps premature rate rise in the first place.