Perhaps then biggest surprise was the enormous fall in gold exports to Hong Kong in the Ausuts Swiss gold export figures. The Chinese semi-autonomous administrative state imported only 3.4 tonnes of gold from Switzerland in August demonstrating in no uncertain terms that the Territory is being sidelined as an import routing for mainland Chinese gold imports in favour of mainland ports of entry like Beijing and Shanghai. Hong Kong gold imports can definitely no longer be considered a proxy for Chinese gold demand as we have been saying for some time, although global media still gives undue importance to the level of Hong Kong gold imports and to the Territory’s exposts to the Chinese mainland.

Mainland China was again the biggest recipient of Swiss gold in August at 45.2 tonnes, closely followed by India with 40 tonnes (see chart from Nick Laird’s www.goldchartsrus.com website below.), suggesting that gold demand in the two biggest gold consumers is holding up reasonably well, but perhaps the biggest surprises were the big rise in Swiss gold exports to Singapore (12.6 tonnes) and even more so Thailand (21.6 tonnes). Interestingly Turkey apparently imported no gold at all from Switzerland in August, but actually exported 12.8 tonnes to the small European nation at the centre of the global gold refining trade.

As usual, the Swiss figures show an ever-continuing flow of gold from West to East with Asia and the Middle East accounting for over 88% of the total export figures. (The United Arab Emirates imported 5.9 tonnes and Malaysia 2.8 tonnes being other significant gold importers from the region in August.

Germany (with 6.2 tonnes) and France (5.0 tonnes) were both significant importers of Swiss gold in August perhaps indicating some safe haven demand as Brexit negotiations, seemingly at an impasse, due to uncertainties with respect to the future of European economies in the event of a no-deal solution to the U.K.’s leaving the EU should this come about. Austria with 1.2 tonnes and Italy with 1.7 tonnes were other EU member nations to import Swiss gold last month. 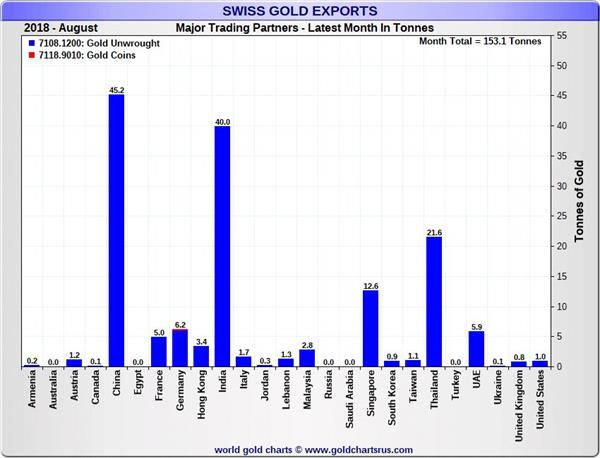 Total Swiss gold exports in August at 153.1 tonnes were at their highest level since June last year, while the nation’s gold imports at 181.7 tonnes the highest since January last year. indicating something of a pick-up in global gold trade via Switzerland.

While the Chinese and Indian figures look positive for gold followers – India recorded its highest level of gold imports from Switzerland for 15 months – on analysis the Chinese figure may not be quite so encouraging. Although the mainland’s import figure could be seen as impressive it should also be recognised that most of the gold going into Hong Kong is ultimately destined for mainland China, and in combination the mainland China figure plus the Hong Kong one (a total of 48.6 tonnes) does not represent an increase in exports to what could be described as Greater China. In fact it represents something of a fall which could indicate slipping gold demand in the world’s No.1 consumer. We will probably see an indicator of this in the next couple of months of Shanghai Gold Exchange gold withdrawal figures when we compare them with prior years.

In India, however, there are rumours afloat of an impending increase in import duty for gold, so imports may continue to flourish until the rumour is laid to rest one way or the other. But gold followers should be encouraged by the very positive figures from Thailand and Singapore.