Switzerland, with its plethora of major precious metals refineries, provides an excellent window on the destinations of the world’s gold output.  It has just released its gold export figures for September and these again show that its gold exports to India, where the month of September leads up to a major wedding season and the succession of festivals centred around Diwali, remains comfortably the top recipient.

India was followed by China plus Hong Kong as the major destination for September’s Swiss gold exports, with a combined total of 20.6 tonnes – substantially behind the Indian figures.  But, unlike India which has virtually no domestic new gold production, China remains the world’s top gold miner, although it may get overtaken as such by Russia or Australia in the years ahead.  Its production appears to be declining, while that of the latter two nations appears to be on the up and the gap has been closing.  The Table below is taken from Metals Focus’ 2021 Gold Focus publication, although others may dispute the comparative total gold tonnages produced by Russia and Australia but they are close enough to be within the margin for error.

Be that as it may, the Swiss figures show the usual massive flow of gold from perhaps less firm hands in the west to likely firmer ones in the east, with over 80% of Swiss gold exports so directed.  Perhaps also significant is that the largest recipient of the Swiss gold in Europe was Germany where long term memories of the 1920s Weimar Republic hyperinflation run deep and gold has a consequent place as a wealth protector to a greater extent perhaps than in other European nations. 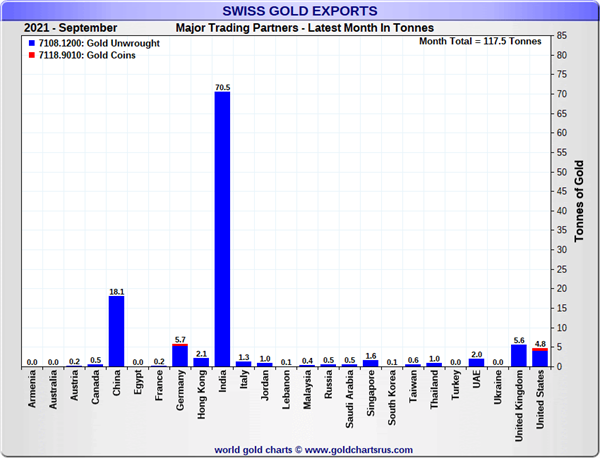 The latest Swiss gold exports for September are detailed in the above bar chart and serve to emphasise the dominance that month of India as the principal recipient of the Swiss gold output – a position it has held as per most of the month-by-month figures for the current year.

Why, one may ask, does this small European nation with no national gold production, play such an important role in international gold flows?  Part of the reason is historic and the country hosts four of the world’s largest gold refineries: Valcambi, Pamp, Argor-Heraeus and Metalor and over the years these refineries have come to specialise in taking in scrap gold, impure doré bullion from mines around the world, and larger gold bars of marginally lower purity (a 400 oz London good delivery gold bar only has to have a 99.5% purity, whereas the Swiss refiners tend to refine to 99.9%) and in the smaller sizes most in demand in the Asian markets.

The Swiss refineries can process an amount equivalent to around half of the world’s new mined gold production, although they have tended to fall below this percentage of late.  That is because new gold refineries have been springing up around the world, some of them managed by the Swiss refining companies, which have been taking up some of the impure gold which had previously been destined for the small European nation for refining.  Nonetheless these refineries still handle enough of the world’s gold for the Swiss statistics to remain hugely relevant to assessing the world’s gold flows.