The latest figures for gold exports from Switzerland just further emphasise that physical gold is continuing to move eastwards in a big way.  The country’s gold refineries sent 74% of their gold exports to Greater China (the Chinese mainland and Hong Kong) and India alone, while if we add in other south and east Asian nations – Malaysia, Singapore, Taiwan, Thailand and South Korea – and the Middle East – Turkey, the UAE, Lebanon and Jordan – fully 90% of Swiss gold exports that month moved to this region.

Why is this so significant?  Switzerland produces no gold of its own, but its gold refineries between them are the world’s largest gold exporters taking gold bullion and scrap from mines and other sources, including good delivery 400 ounce bars, and re-refining these into the smaller sizes in demand in Asia and the Middle East and re-exporting the bullion mostly to these eastern nations.

The latest Swiss figures also support the anecdotal evidence of extremely tight supply, with the Swiss refineries struggling to source enough gold to meet the eastern demand.  In June, Switzerland exported in total 162.1 tonnes of gold while only importing 124.9 tonnes – a shortfall of 37.2 tonnes.  This is the second month in a row where Swiss gold exports were substantially larger than imports – the figure for May was around 39 tonnes.

Looking in more depth at the Swiss figures, June was the first month this year in which India was not the biggest importer of Swiss gold – being replaced by both Hong Kong and China as the top export destinations.  It has been widely reported that now the level of the new Indian Goods and Services Tax (GST) to be applied to gold has been set at 3%, additional imports in anticipation of perhaps an even larger imposition, have been falling away.  Nonetheless total Indian gold imports in the first half of the current year at over 500 tonnes are hugely above those for 2015, when first half imports were particularly depressed due to a prolonged protest strike by the country’s huge jewellery fabrication sector.  We are now entering anyway something of a hiatus period for Indian gold imports with the agricultural sector (a big gold demand source) bringing in the post monsoon harvest and July through October seen as an inauspicious time for Indian weddings where gold often plays an important part.  We would thus expect Swiss gold exports to India to remain relatively low until October ahead of the big Diwali festival, which happens at the end of that month, and the resumption of the wedding season.

But as Indian gold imports fall those into China seem to be taking up the slack – see the graphic below from Nick Laird’s excellent www.goldchartsrus.com service: 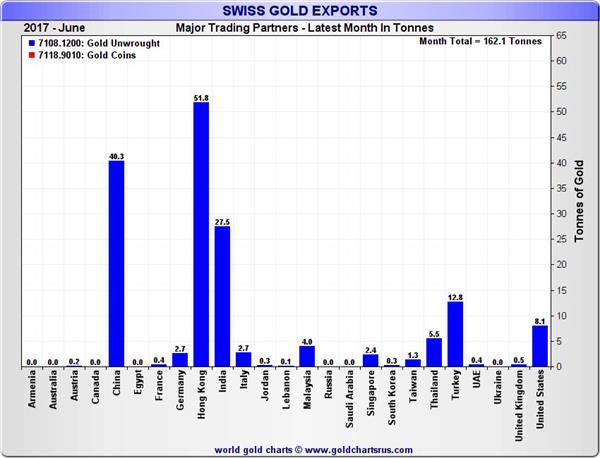 The similar chart from www.goldchartsrus.com of Swiss gold imports (see below) may also be an excellent indicator of the Swiss refiners’ struggles to source enough gold to meet their export demands: 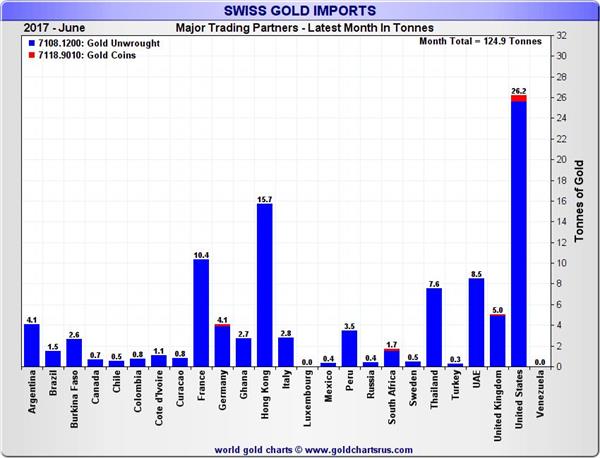 While much of the Swiss imported gold is indeed coming from global gold mining nations, significant amounts are also flowing in from non traditional sources like Hong Kong, the UAE and Thailand, which historically are gold importers and fabricators of gold jewellery and artefacts.  This suggests that the Swiss refiners are aggressively having to seek scrap supplies for remelting and re-refining from these sources.  The gold coin element in the imports may also be significant in this respect.

All in all the latest Swiss figures do emphasise what seems to be an ever continuing flow of gold from Western vaults into firmer hands in the East, and also the potential supply shortages for physical gold which appear to be building up.  Ultimately these shortages will find their way into physical gold pricing.  External factors like the U.S. Fed interest rate deliberations are just a diversion.