So much of the data we are fed by governments and quasi-governmental outfits like the US Fed are so massaged in favour of trying to maintain a positive sentiment among the great unwashed that they cannot be seen as comparable with supposedly the same stats from the the past.  I am indebted once again to Grant Williams (no relation) who points some of these anomalies out in great detail in his latest Things than make you go hmm… newsletter entitled ‘Fake Views Part II’ bringing the oft-quoted  "There are three kinds of lies: lies, damned lies, and statistics" into mind.  Interestingly the quote is often attributed to Mark Twain but he himself is said to have attributed it to British Prime Minister Benjamin Disraeli who may have been ahead of his time in forecasting statistical manipulation as political spin!

To illustrate his point Grant draws heavily on data and charts provided by yet another member of the Williams clan, John Williams (again no relation to Grant or myself) who runs the fascinating ShadowStats website which calculates government data the way it used to be calculated before the current era of using statistics as political weaponry.  This has distorted the figures used by US government entities, on which many, or most, of their economic decisions are justified, beyond recognition.  Indeed a significant part of the problem is that those making these decisions no longer question government-provided economic data but automatically assume its accuracy.

Take the cost of living for example.  If one goes by Fed figures CPI is growing at an annual rate of around 1.8-2% - a figure few consumers would recognise as applying to them!  If one calculates the Cost of Living index the way it was calculated back in 1980, inflation is actually rising on that basis at the much more recognisable figure of nearer 9% per annum – see the Shadowstats chart below: 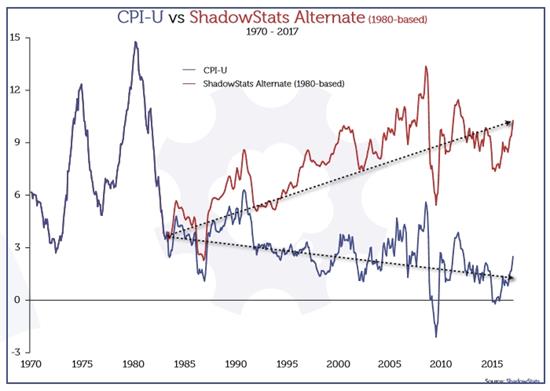 As John Williams, as quoted in the TTMYGH newsletter, points out: In the early-1990s, political Washington moved to change the nature of the CPI.  The contention was that the CPI overstated inflation (it did not allow substitution of less-expensive hamburger for more-expensive steak for example).  Both sides of the aisle and the financial media touted the benefits of a “more-accurate” CPI, one that would allow the substitution of goods and services.

The plan was to reduce cost of living adjustments for government payments to Social Security recipients, etc.  The cuts in reported inflation were an effort to reduce the federal deficit without anyone in Congress having to do the politically impossible: to vote against Social Security.

The inflation-calculation changes had the further benefit to government fiscal conditions of pushing taxpayers artificially into higher tax brackets, thus increasing tax revenues.  The changes afoot were publicized, albeit under the cover of academic theories.  Few in the public paid any attention.

And so it goes with much of the other data on which the US Government bases its figures, although CPI (and perhaps the calculation of GDP) are the most obvious examples.  And it is not just the US which massages its figures thus.  Most developed world politicians/economies have done likewise.  It’s a way of keeping the population in check by releasing government-calculated figures which appear to show everything is rosy and under control when a deeper analysis might show that we are actually sinking into the abyss.

These massaged figures – described by Grant Williams as ‘Fake Views’ – have to be of considerable importance to the gold investor who is told that gold benefits in times of negative interest rates and where the gold price can be knocked back by the prospect of interest rates rising by tiny amounts even though they may still remain at zero or are, in fact, marginally negative.  But as the ShadowStats CPI figures show, real interest rates as experienced by the person in the street are not just marginally negative, they are in fact HUGELY negative and wealth is being eroded at an unprecedented rate.  On this basis the gold price should be going through the roof, but unfortunately for the precious metals investor, the financial world at large is mesmerised by the official statistics and unless, and until, there is a realisation that the data is just not representative of reality, a lacklustre gold price will continue to result.  I don’t know what one can do to change this reality of the belief in government data – shouting it from the rooftops in the hope that someone in authority will listen is almost certainly not enough.  Those in authority have a vested interest in maintenance of the status quo.

There is also currently the Trump effect – he is seen as the second coming of Ronald Reagan – and equities markets have been booming.  Trump rails against ‘Fake News’ as trying to damage his Presidential plans, but he is also himself a source of equally ‘Fake News’ in support of his policies and no doubt ‘Fake News’ on the strength of the US economy, and how well, and how fast he is proceeding to ‘Make America great again’ will continue to be broadcast by his spin doctors and press aides.

Grant Williams in his newsletter also questions the level of the VIX (uncertainty) index which is extremely low, yet perhaps should be riding high given the difficulties Trump appears to be having in getting his policies and appointees in place.  He also appears to be having continuing problems with the judiciary over his immigration executive orders.   This has to bring the fruition of some of his other forthcoming plans into doubt – notably the proposed changes to Obamacare -  even with a Republican dominated Congress given that he appears to be having problems keeping some members of his adopted political party on side.

So what is the take-away from all this.  We live in such a spin-dominated world where even ‘official’ statistics and data have to be suspect.  These may be accurate as far as the calculation process is concerned but often one will find the goalposts have been made to make true comparisons with the past difficult to correlate.  Ultimately one has to trust one’s own judgement and hope the truth will come out which will, in this case, be long term positive for gold and silver in particular but they may have a tough time finding their true value in the light of concerted efforts to hide it.