LAWRIE WILLIAMS: Murenbeeld bullish on gold, but not unduly so

The latest updated average gold forecast from Canadian specialist consultancy, Murenbeeld & Co., continues with a positive outlook for the yellow metal.  However this still probably falls short of our own predictions, particularly in the light of the latest Consumer Price Index (CPI) data release from the U.S. Bureau of Labor Statistics on Friday.  This put the year-on-year inflation increase as an above-general expectation 8.6% - yet again the highest annual increase for over 40 years.  We, contrary to much mainstream media opinion and the markets, had been anticipating the further inflation rise and had thus predicted the markets’ reactions driving general equities and bitcoin down sharply and giving something of a boost to precious metals prices, and to gold in particular.

Economist and gold specialist, Martin Murenbeeld, who originally set up the consultancy which bears his name, calculates, and regularly updates, his gold price predictions utilising three forward pricing scenarios to each of which he gives a quarterly weighting.  He then applies the weighting to come up with a quarterly average, adds an amount to allow for unknown geopolitical issues and comes up with quarterly average price predictions up to a couple of years in advance.  He has generally been cautiously bullish on gold and his latest update is no exception.  He has also tended to be one of the most consistently accurate gold price forecasters out there, particularly as he is not given to making some of the outlandish gold price predictions, so beloved by some of his peers.

Scenario A (the most bearish) of the Murenbeeld scenarios, considers a continuation of dollar strength and higher U.S. Treasury Inflation Protected Securities (TIPS) yields with inflation dissipating and the surge in gold demand on the back of the Ukraine war largely disappearing.

Scenarios B (the most likely case) and C (the most bullish one) each see an end to the rise in the dollar index (USDX) and the TIPS yields, but earlier in Scenario C than Scenario B. The key factor in these two scenarios is the speed with which the Fed is encouraged to shift to a less aggressive policy. This in turn depends upon when inflation tops out. (But inflation will remain quite elevated regardless in both scenarios – which continue to be positive for gold.)  It all depends on the shape of the U.S. economy and how well it recovers, if at all. We can probably expect elevated year on year percentage inflation rises until at least September as it was from September 2021 that inflation levels started to steepen.

Scenario C will see relatively high inflation against a backdrop of recession (or at the least stagflation), a declining dollar and declining TIPS yields. Falling employment levels could prompt additional Fed action under this scenario.

Murenbeeld takes into account that the war in Ukraine will almost certainly remain a potent, constant, factor in the gold market; only in Scenario A is it assumed to cease affecting gold demand – ETF and otherwise. He has not, though, considered that there is likely to be any catastrophic military actions by Putin in any of the three scenarios, pointing out that “experts” consider the probability to be very small, although not zero!  If President Putin should employ unacceptable weaponry, or extend the ‘invasion’ into other sovereign nations, then one would anticipate a substantial additional positive price impact on gold, but let us hope and pray that this is not something that Putin may implement. 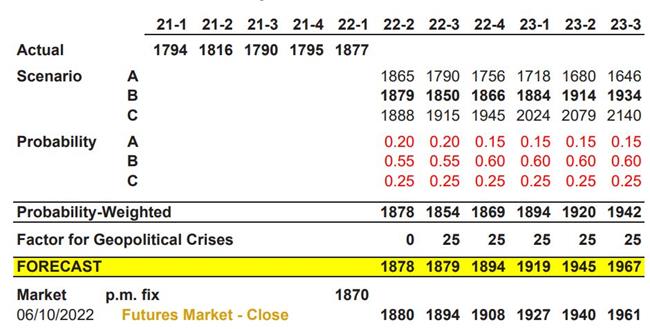 Murenbeeld’s price predictions for gold going forwards, and the quarter by quarter likelihood weightings he applies to each scenario, are set out in the table above.  As can be seen he only anticipates a Q4 gold price average of $1,894 for gold in the current year, and while this does not entirely rule out a year-end spot price of $2,000 or higher, as we and some others, have been predicting, it does seem to suggest this may not be likely.