It’s that time of the month again when the Russian Central Bank announces it latest gold reserve figure.  Russia has been by far the biggest buyer of gold in recent years – at least in terms of officially reported gold holdings to the IMF – and for the past two years has added around 200 tonnes a year to its holdings, so the latest figures are watched by analysts to see if the same will happen again this year.

The latest reported figure out of The Bank of Russia is that it added 1.1 million ounces (34.2 tonnes) of gold to its reserves in September, bringing the total year to date to 163 tonnes, well on track to hit the 200 tonnes figure for its gold purchases again this year.  Indeed it looks as though Russia could be stepping up its gold acquisitions to exceed the 200 tonne figure for the full year, with three months still to go.  However Russian month by month purchases do vary quite considerably including the occasional zero month (See the  below chart from Nick Laird’s www.goldchartsrus website) so although it only needs to add a further 37 tonnes over Q4 to reach the 200 tonne figure, it could yet be aiming again just for this kind of level of full year purchases. 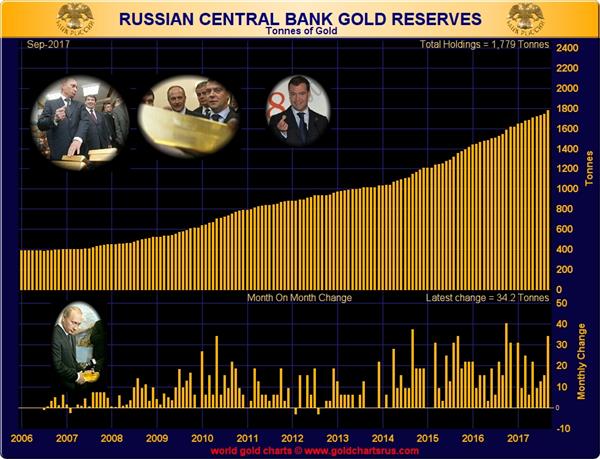 The latest figure puts the nation’s total gold reserve at 1,779 tonnes – still in sixth place among national gold holdings according to the IMF data.  This only puts it around 64 tonnes less than fifth-placed China’s reported figure (although we believe this to be substantially understated – See: The fiction in Chinese gold reserves and media import coverage and CHINA – Still no official increase in gold reserves), and on track to exceed the Chinese total by the year end, or early next year assuming China continues to report zero gold reserve increases to the IMF.

Vladimir Putin’s Russia is the world’s third largest gold producer and vying for second place with Australia with both seemingly still increasing their respective gold output levels in the current year.  Last year Russia, according to the analysts from Metals Focus, produced around 274 tonnes of gold (See:  World Top 20 Gold: Countries, Companies and Mines) so its central bank appears to be buying up around 70% of its national production.

Adding the gold to its reserves is another way of reducing Russian dependence on the U.S. dollar – a policy exacerbated by U.S. threats to cut the country off from the Western financial system.  With oil and gas being key exports recent bilateral deals between Russia and China for the latter to buy much of its huge oil and gas imports from Russia paying for this in yuan (ultimately redeemable in gold), together with the construction of cross-border pipelines, are also key elements in future global financial change involving Russia and China, both of which appear to believe that gold has a hugely significant role to play in global finance in the years ahead.