The latest figures for Swiss gold imports and exports raise some interesting questions.  They confirm, for example, that Asian demand, as primarily represented by China and India, remains weak; that Hong Kong flows are no longer a proxy for total Chinese gold imports and; show a very big net export figure for gold going into the UK.  While overall imports (146.2 tonnes) were virtually in balance with exports (146.7 tonnes) the sources of some of the imported gold will also raise questions about the state of the global gold market and where demand truly exists. 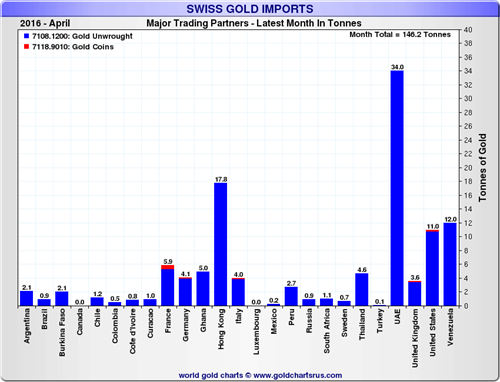 For example, the biggest exporter of gold into Switzerland in April was the United Arab Emirates – not exactly one of the world’s largest gold producers, and the second biggest was Hong Kong, which exported much more gold to Switzerland than it imported (it is usually a big net importer).  But both are of course big gold trading centres and it may well be that traders were taking profits by selling in bulk to Switzerland given the rise in gold price so far this year and that weak demand may have meant they were carrying more in inventory than they deemed comfortable.

The Hong Kong and China export figures just serve to confirm a trend that has been apparent for some months now.  Switzerland – probably the biggest known source of exported gold for China, is continuing to export more to the Chinese mainland than via Hong Kong which confirms our view that Hong Kong net export figures into the Chinese mainland are ever less an indicator of total Chinese gold imports.  Time was the Hong Kong export figures for gold to China were by far the greatest proportion of total Chinese imports and were taken as a proxy for the total amount of gold going into China by analysts around the world.  This is definitely no longer the case and any media reports still suggesting this should be totally ignored.

The import figures also confirmed reports that Venezuela shipped a further 12 tonnes of gold to Switzerland to help generate sufficient funds to meet its debt commitments.

But it is the export figures which raise some very interesting flags for this writer.  The largest recipient of Swiss gold in April was the U.K. taking in a net figure of 75.4 tonnes (exports minus imports).  This follows on from net exports to the U.K. of 41.8 tonnes in March.  Historically the U.K. has exported more gold to Switzerland than it has imported back – very comfortably.  The flow has been primarily for the re-refining of 350-430 troy ounce LBMA Good Delivery gold bars from the London vaults into the smaller sizes demanded by the main consuming markets in Asia. 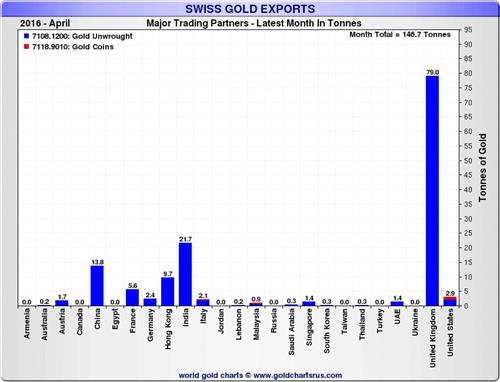 But suddenly London is importing gold in significant quantities from Switzerland – presumably in good delivery bar weights (The April import figure alone will have been worth upwards of £2 billion which won’t please the UK government in trying to balance its books!).  Now this may well be to satisfy demand from the big SPDR Gold Shares ETF demand.  SPDR Gold Shares (GLD) are traded in North America but the gold is vaulted in London.  This could suggest perhaps that there is very tight availability for physical gold in London as a number of analysts have been suggesting recently.

One particular piece of reserach on this stands out.  Readers are directed to read some fascinating research from Paul Mylchreest of London brokerage ADSI.  (Paul will be remembered as the erstwhile writer/publisher of the late lamented Thunder Road report.)  In his research into London gold vault figures he came up with data suggesting that London could be down to extremely low levels, and even in default, on unallocated physical gold.  You can read the full report as published in U.S. website, Zero Hedge, by clicking on "The Death Of The Gold Market" - Why One Analyst Thinks A Run On London Gold Vaults Is Imminent.  It’s a 60 page report so you may need some time on your hands to read through it – but the conclusions are perhaps a little scary – or perhaps stimulating for the gold bulls among us considering the ramifications of its conclusions.

Mayb e I'm being naive here, but could this be why the U.K. is having to import gold from Switzerland in such large quantities?