The latest release of Switzerland’s gold imports and exports for November confirm the pattern set in recent months, although there seems to be evidence that the figures may just be beginning to change – at least a little.  As well as what might be expected from gold producing nations, the Swiss refineries are yet again importing a substantial amount of gold from countries which might normally be seen as gold consumers, but perhaps a little less than in previous months. This minor patter change so far,  either means that any excess inventories held by gold traders and fabricators is being run down and scrap supplies for refining from these countries may be building up.

During November the Swiss figures show that gold imports totalled 98.8 tonnes with the largest amount coming from the U.S. (14.5 tonnes) which we assume would likely be mostly from that nation’s gold mines – the U.S. is the world’s fourth largest gold producer (after China, Russia and Australia) – see  Top 20 Gold mining countries – Russia now No.2 - and 14.5 tonnes represents about 7% of the country’s current annual gold production so there could be a relatively small scrap gold element  in this total.  However the other major exporters of gold to Switzerland in November mostly have little or no domestic gold production so the gold has to have come from excess inventory levels or scrap – see bar chart below courtesy of goldchartsrus.com as is the chart on November’s Swiss gold exports further down the page..

As can be seen, after the U.S. the biggest sources of Switzerland’s gold imports included Hong Kong, Italy, France, Germany and the UAE, which all have little or no gold production of their own so had to be supplying gold obtained from scrap, or from the running down of existing gold inventories.

Swiss gold exports in November also provide some interesting analytical points - notably as to where the Swiss gold was going that month.  Top recipient was India, indicating there may have been a pickup in demand from the world’s No.2 gold consumer, but shipments to China, the world’s No1 consumer, either directly, or via Hong Kong were close to zero, although in some ways that is less relevant given China is still the No1. world gold producer in its own right.

Other principal destinations for the Swiss refined gold include the U.S. – a major consumer in its own right, Turkey – where the central and private banks have been purchasing gold, Thailand, Singapore and Taiwan demonstrating strong buyer interest – perhaps ahead of the Chinese New Year given the large Chinese populations in these nations.  France, Germany and Italy also figure quite strongly indicating decent investor and fabricator demand in those countries.

As usual Swiss gold imports and exports provide an interesting window on global gold flows.  It is perhaps less important nowadays in the gold refining universe in terms of total tonnage of gold processed, given the rise in refining capability worldwide, but this small European country still handles for refining and re-refining an amount of gold equivalent to over one-third of global new mined gold output.  As Switzerland is also a consistently reliable source of gold data, and given the Swiss refineries still handle such a high proportion of global gold trade, we tend to follow the monthly Swiss figures closely as readers of our coverage will be well aware. 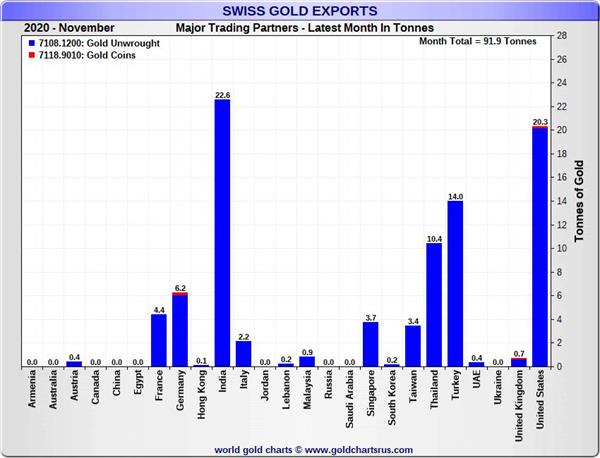