SHARPS PIXLEY - Why is Gold at a cross road while Silver is outperforming?

The US House of Representatives voted 234 - 190 to sign off the 3 month suspension of the $ 16.4 trillion federal borrowing limit. The bill will suspend the debt ceiling until 19th May and allow Treasury to continue borrowing to pay bills. Once the “suspension” period runs out, the borrowing limit will automatically adjust to reflect the country’s increased debt level. We identified this as gold positive and should benefit bullion prices in general.

On the other side of the continent, policymakers in Europe are slightly concerned about the current devaluation of JPY. Japan may have kick started a currency war which might attract other central bankers to join in. We also see the deteriorating Spanish Q4 GDP year over year since 2009 - coupled with house prices, manufacturing and retail sales all at depression levels. In addition, IMF cuts global growth and envisaged European recession for 2013.

Short Term: In the late European trading hours (after the IMF report), the US dollar (safe haven appeal) kicked in and weakened gold to retest $ 1683.75 levels. As mentioned in our last commentary, we are concerned about gold ability to cross its previous high of $ 1697. At the moment, we remain neutral bullish on the gold price since it is still consolidating between $ 1686 and $ 1696 areas.

Medium Term: Our concern remains focused on gold and if it would fail to break the 1700 level. Prices did find support at $ 1684 which is the long term uptrend line and retraced higher after the IMF bleak report on growth. Further supports are available at $ 1673 and $ 1666 (breakout price). Failure to hold on to $ 1666 could indicate the continuous down trend and prices may retest January low at $ 1625. 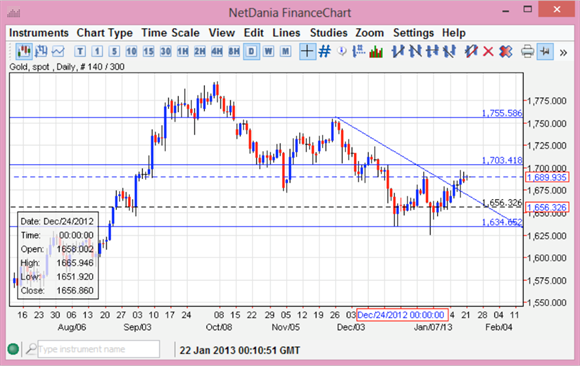 Short Term: We witnessed silvers prices moving higher and breached its previous high of $ 32.37 to $ 32.47 as the new high for the month. As mentioned in our last article (please place old link), there were buying interest and one of the positive news is from the sale of silver between HSBC and KGHM at an estimated $ 876 million dollars. Analysts polled by Reuters expect silver to rise in 2013. Demand comes in the form of silver backed ETF’s and also coins and bars. The weaker gold / silver ratio also favours silvers against gold in general.
At the moment, we are happy with silvers performance and remain neutral bullish as the buying momentum continues. As long as the buying interest is strong, we maintain to add in our previous go-long position at $ 31.60 and place a breakeven stop at $ 32.05.

Medium Term: After reaching the January high, silvers prices dipped back to $ 32.09 on the back of the IMF report and also due to renewed dollar strength. This showcase a strong support on silvers prices because it quickly recovered to $ 32.30 area. The current silvers prices have the ability to sustain its gain and pared those losses. We are facing the next trance of resistance at $ 32.47 areas and targeting $ 33.54. At the moment, we are still bullish unless silver turns back below $ 31.00. 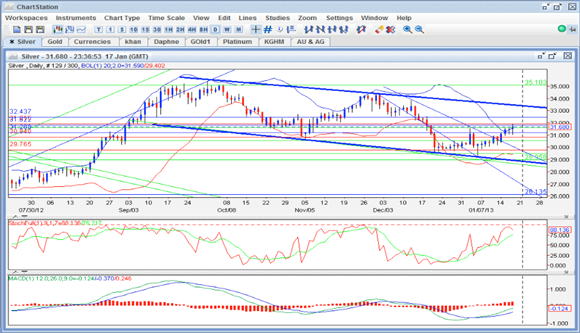 
This article is written according to the author’s views and by no means indicates investment purpose. Opinions expressed at Sharps Pixley Ltd are those of the individual authors and do not necessarily represent the opinion of Sharps Pixley Ltd or its management, shareholders, affiliates and subsidiaries. Sharps Pixley Ltd has not verified the accuracy of any claim or statement made by any independent writer and is reserved as their own and Sharps Pixley Ltd is not accountable for their input. Any opinions, research, analysis, prices or other information contained on this website, by Sharps Pixley Ltd, its employees, partners or contributors, is provided as general market commentary and does not constitute investment advice. Sharps Pixley Ltd will not accept liability for any loss or damage, including without limitation to, any loss of profit, which may arise directly or indirectly from use of or reliance on such information. The data contained on this website is not necessarily real-time or accurate